There are spoilers in this essay for the 1950 Movie Destination Moon so if you care about spoilers for a seventy-year-old film, watch the movie first and then read the essay.

We live in an age where the majority of movies aggressively seek to suppress traditional notions of masculinity and male heroics. And no, male superheroes or male action heroes are not the sorts of masculine heroes of which I speak. Physical strength and combat skill are certainly historic traits associated with male heroes but these are not the sole qualities which make a male into a man. I was considering this question – where are the men in contemporary films? Not the “dudes” (I’m thinking of Starlord from Guardians of the Galaxy in particular and to some extent Poe Dameron from The Last Jedi), not the male characters, not the dead-beat father figures (Han Solo) – the men. Quite honestly, they are a rare find in movies today (the only real example I can think of from the last two decades is the Lord of the Rings Trilogy) and in a society plagued by fatherlessness, men in our movies and stories are needed more than ever to provide so many boys with positive examples of how men should act. But I think it’s obvious with the current cultural climate in Hollywood and the film industry, we won’t be seeing such characters for a long time.

The best way forward then, is to take a look back. There are plenty of older movies with positive male heroes but when I asked myself “What is movie have I seen that has the manliest men you could imagine?” I surprised myself by answering “George Pal’s Destination Moon.” Destination Moon, released in 1950, was the science fiction drama that ushered in the 50’s science fiction craze at the cinema. The writer of this iconic film was the legendary Robert A. Heinlein who took inspiration on several plot points from his book Rocketship Galileo (which is incidentally one of my favorite works of science fiction even if it is on the juvenile side).  And yet despite the cheesy and cheap productions to follow in its popularity, Destination Moon was not cheesy and presented a dedication to realism that quite honestly makes the movie something of a bore on a sheer entertainment level.

The plot is literally, “American corporations come together to put a rocket on the moon and they do.” Now, there is conflict, both from a nameless but presumably Soviet-backed opposition and from technical dangers that complicate their return voyage. Personally, I wish Heinlein would have borrowed more from Rocketship Galileo for his central conflict – in Rocketship, they encounter a hidden Nazi base on the moon – simply adapting the Nazis to perhaps be the Soviet opposition that the movie heavily implies but does not deliver on.  And yet, Destination Moon is a visual treat with all the fixtures soon to be classic sci-fi movie tropes such as the bullet-shaped rocket, a dry and cracked lunar surface and accordion-jointed space-suits.  But more importantly, Destination Moon features first three and then four of the manliest men I’ve ever seen in a movie. 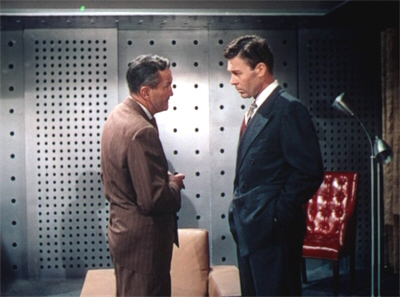 Let’s start with the three. First, we have the manliest of the bunch – Jim Barnes (John Archer) an industrialist manufacturer of aircraft and engines. Next, we have Dr. Charles Cargraves (Warner Anderson), an engineer extraordinaire. Last, we have General Thayer (Tom Powers), the former military man who’s dream starts the whole expedition. Each of these men displays great skill and intelligence in their fields, and enormous dedication to the vision once they commit. But their trust test of courage comes in two separate occasions.

The rocket is a privately funded project, with several companies coming together under Barnes’ leadership to make this expedition a reality. They are incentivized by the military potential of course, and also by a strong sense of patriotism (which goes back to the hints of Soviet opposition). However, when they request permission to test the atomic-energy engines on site (at White Sands, New Mexico) their request is denied unless they move testing to the South Pacific. Unwilling to spend more money they don’t really have, and also determined to push on with their mission, the three men make a bold decision to fly the rocket themselves rather than let the government (influenced by Soviet-manufactured public opinion against the testing) stop them. The decision is not reckless. They go in knowing full well the dangers of flying an untested ship, and ready to sacrifice their lives if need be. They have a courage not built on bravado or pride but on conviction.

The fourth man has an arc that takes him from boy to man. Enter Joe Sweeney (Dick Wesson), radio and radar technician from Brooklyn who is interesting solely in “beer, babes, and baseball”. Sweeny enters the four-man crew with seventeen hours to go after the original fourth man (a character we meet once) is taken sick with appendicitis (hinted at by the movie earlier) and Joe Sweeny is the only one left who is trained to use the equipment. Barnes and Thayer convince him only once he is assured the rocket will not blow up (and, in his mind, not even budge). Sweeny handles the challenges of the voyage less than gracefully and on the Moon, he is interested in frolicking and not in serious exploration.

The final test of their courage comes in the movie’s final conflict. The ship burned too much fuel in the landing attempt, and as a result, cannot pull free of the Moon without dropping a ton a weight, so the four astronauts strip the ship to the bare bones. Finally, they have only themselves, one space-suit (for entering the air-lock when airless) and their radio.  But they come up 110 pounds short. With no other recourse seemingly left to them, the three men debate over who will stay each making a case for why he should make the sacrifice. Finally, Sweeny, watching from the background and wearing the remaining space suit, suggests they match for the honor and as they are distracted he quietly leaves the ship, intending to make the sacrifice himself. He shrugs off his gesture with his usual slang and bravado – “Goodbye fellas! Remember to the gals- any gals” – but then Barnes realizes a way to lose the extra weight without one of the men sacrificing themselves. I’ll let you watch the movie to see how.

Sweeny grows from a dude to a man, becoming like these three men he looks up to. Sure, the movie itself has some yawning moments but these four men teach us some relevant lessons on manhood. They exhibit courage, conviction, and self-sacrifice but also wisdom, grit, ingenuity, and duty. Cargraves, the only married man among them, is devoted to his wife and two sons in what few glimpses we receive into his family life. And in the course of their journey, these four men become fast friends.

There are other movies out there with men of this caliber – I think again of the Lord of the Rings trilogy – but one can never have too many stories with admirable heroes so I wanted to dedicate some attention to Destination Moon and its portrayal of the manly Moonmen.